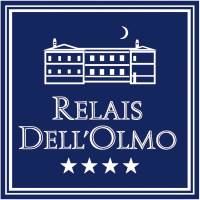 SPOLETO
Spoleto, even if shows evident traces of the Roman era even in its urban structure, substantially mantains a medieval appearance, due to the period in which it was first a flourishing longobard Duchy, and then an important city within the Papal State.

The Arch of Drusus (23 A.C.) to be found near the Romanic church of St. Ansano , the Roman theater, whose construction goes back to the first years of the Empire, and the paleocristian basilica St. Salvatore of the 4th century (at about 1.2 km’s distance to the north), are testimonials of Spoleto’s earliest origins. Close by, the church St.Gregorio Maggiore,(12th century), characterized by its evocative apsis zone and by the elevated presbitery, a Roman bridge (also called “the Bloody”) consisting of three arches in travertine stone blocks and the amphitheater of the 2nd century A.C. can be found. More modern monuments which are as fascinating are the churches of St. Dominic and St. Ponziano, both of which were built during the 12th century. The church of St. Peter is surely of great interest because of its extraordinary bas-reliefs which decorate the facade which dates back to the 12th century.
From the area found in front of the church of St. Peter one enjoys a wide panorama which encompasses all of Spoleto until the mighty Bridge of the Towers (ten arches with a total height of 80 meters and 230 meters long), which connects the Castle, which was constructed from 1352 onwards on the orders of the Cardinal Egidio Albornoz according to plans by Matteo Gattaponi, to the runners of the mountain which dominates the city. Monteluco was, in fact, the sacred mountain of the anchorites, who having settled in this zone from the 7th century on, founded the convent of St. Francesco, to be found at about 8 km’s distance from the inhabited area, and the church of St. Julian. Without doubt, on the person who has the good luck of visiting these sights, the entire Cathedral complex constructed during the 12th century and caracterized apart from the richness of furnishings of the interior also by the mosaics in the Byzantine style on its facade, and the Romanic church of St.Eufemia will make an unforgettable impression.
Among the most important manifestations taking place in the city we should absolutely mention the festival Festival of the two Worlds.

TREVI
As with the the greater part of the medieval towns in this area, Trevi rises up on a hill dominating the plain where the river Clitunno flows, between Foligno and Spoleto.

One of the most interesting artistic monuments for whoever visits this town is without doubt the church of St. Emiliano of the 12th century, with three apses decorated with pilaster strips and small arches supported by wall-brackets. Inside the church, you’ll find the Altar of the Sacrament, a very fine work of art attributed to Rocco of Vicenza (1522). Apart from the church of St. Francis built in the Gothic style and dating back to the 13th century, which contains frescoes of the 14th and 15th centuries, we recommend a visit to the Pinoteca lodged in the Town Hall (15th century), where you can admire a Madonna by Pinturicchio and a Coronation of Mary by Spagna. Being situated slightly outside the town, you’ll shortly arrive at the Madonna of the Tears (1487) with a beautiful fresco by Perugino and the Romanic church of St. Peter at Bovara.

CAMPELLO SUL CLITUNNO
The town of Campello sul Clitunno is to be found at about 10 km north of Spoleto. Its fame is due more to the bucolic atmosphere of its springs, descrived in the past by poets as important as Vergil and Carducci, than to its artistic works or to the fortified town of Campello Alto.

The small Temple of Clitunno (or church of St. Salvatore) is situated near the springs; it is of paleocristian origin and dates back to the 5th century, consisting in a cell with a classical pronao in front. In the neighborhood, the town and the castle of St. Giacomo of Spoleto, the castle of Pissignano and the villa – castle of Lenano, are worth visiting. 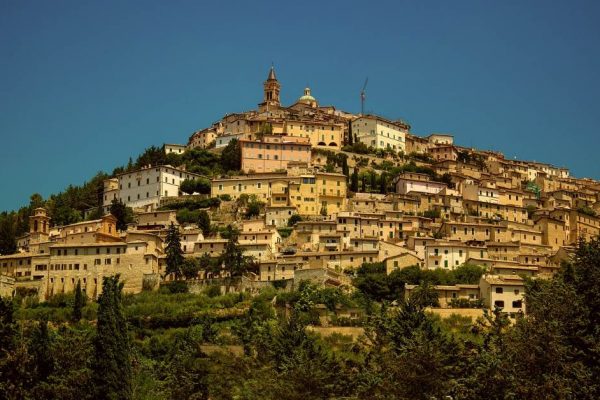 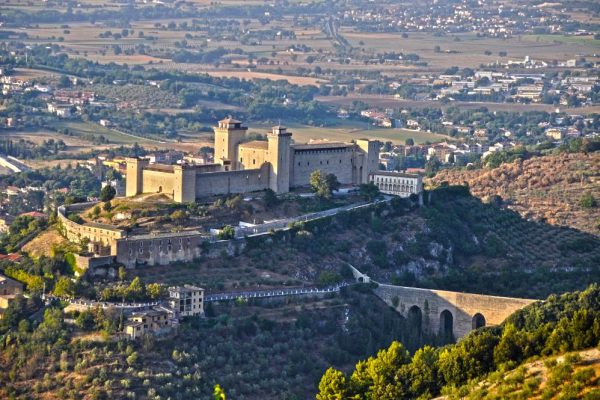 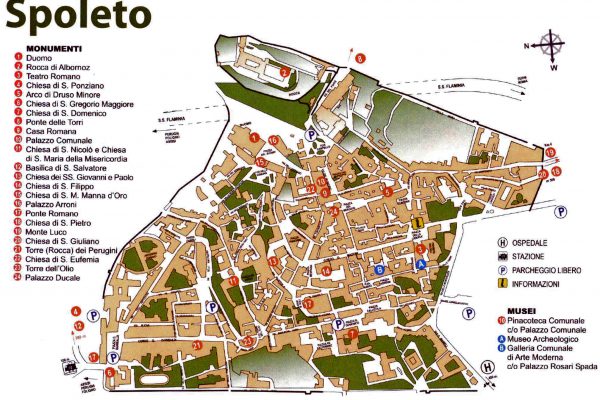